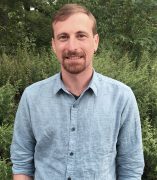 Assistant Professor of Visual Culture of the Ancient Americas

Andrew Finegold is an art historian specializing in the visual culture of the ancient Americas. He received his doctorate from Columbia University in 2012, completing a dissertation on the brief and anomalous appearance of narrative battle imagery in Epiclassic Mesoamerica. His book Vital Voids, which is forthcoming from University of Texas Press, examines the real and symbolic values ascribed to holes, cavities, and voids across a variety of media in Mesoamerica. A portion of this research was published as an article titled "Vitality Materialized: On the Piercing and Adornment of the Body in Mesoamerica" in the journal Latin American and Latinx Visual Culture. His further research interest in the relationship of painted imagery to material ground on Mimbres bowls has resulted in an article published in the journal Art History. He is co-editor, with Ellen Hoobler, of the volume Visual Culture of the Ancient Americas: Contemporary Perspectives (University of Oklahoma Press, 2017) to which he contributed an essay titled “Atlatls and the Metaphysics of Violence in Central Mexico.” He was awarded a Mellon Postdoctoral Fellowship at NYU’s Institute of Fine Arts (2015–16) and was a Visiting Research Scholar at the Sainsbury Research Unit of the University of East Anglia (Fall 2018).

“Vitality Materialized: On the Piercing and Adornment of the Body in Mesoamerica.” Latin American and Latinx Visual Culture 1.4 (2019): 55–75. [PDF]

“Atlatls and the Metaphysics of Violence in Central Mexico.” In Visual Culture of the Ancient Americas: Contemporary Perspectives, ed. Andrew Finegold and Ellen Hoobler, pp. 223–236. University of Oklahoma Press, 2017. [PDF]