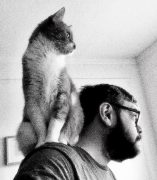 Erik Wenzel’s research focuses on mental illness, addiction and the creative impulse. He is especially interested in how madness is depicted in popular culture. Most recently he has worked on the B-movie series Cube, looking in particular at non-Euclidian spaces associated with the specific forms of madness and mental decline portrayed in the films.

Wenzel’s writing has appeared in Akademie X (Phaidon, 2015), How to Write About Contemporary Art, by Gilda Williams (Thames & Hudson, 2014) and “The Lives They Lived” issue of The New York Times Magazine (12/28/14). He co-edited and contributed to Internal Necessity: a reader tracing the inner logics of the contemporary art field published by Sternberg Press in 2010. Wenzel was a Fellow at the Sommerakademie at the Zentrum Paul Klee and attended the Salzburg International Summer Academy of Fine Art. He received his MFA from the University of Chicago and BFA from the School of the Art Institute of Chicago. He teaches courses in art history and studio art at Roosevelt University.