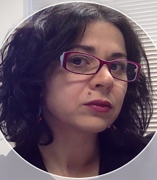 Mirela Tanta is an Assistant Professor of Art History at Millikin University. In 2014, she earned her doctorate degree from the University of Illinois at Chicago for her dissertation titled: Propaganda or Resistance: Socialist Realism in Romania 1972-1989. Mirela Tanta specializes in Modern and Contemporary Art and Criticism. Originally from Romania, she was first exposed to the United States as an Arts Link fellow in poetry through the International Writing Program at the University of Iowa. Her interest in the ways in which underrepresented, ephemeral, and personal art objects can empower the individual to become a maker of knowledge informs her poetry as well as her research and teaching. The recipient of numerous grants and fellowships, Mirela Tanta has continued to present her scholarly work internationally on the subjects of memory, visual culture, and artistic agency under dictatorships.