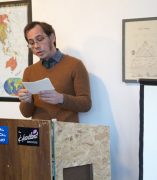 Chris Reeves studies 20th century and contemporary art in the United States and Europe. His dissertation, Playing Music Badly in Public: Brian Eno and the Limits of the Non-Musician, examines a widespread trend among artists in the 1970s of starting musical acts, and the lasting effects of such efforts. More broadly, his research interests include art and technology, internet art, artists books, Fluxus, performance art, punk and DIY, and localized collaboration. His work has been published in various forms and shapes - as a vinyl LP, a large cardboard mountain, a didactic wall text, an arts journal, and a whoopee cushion - as a mans to consider the dialogical between text, content, and material. He has presented work at the CAA, MLA, SLSA, MACAA, and various other acronym'd organizations. In 2018 he co-founded & currently runs (with Curtis Miller) Flatland, an artists event space, in McKinley Park. In 2020 he edited (with Aaron Walker) "The World's Worst: A Guide to the Portsmouth Sinfonia" released on Soberscove Press.