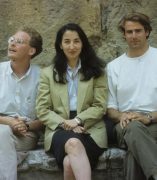 Martha Pollak is Circle Professor of Architectural History at the University of Illinois at Chicago, specializing in courses on the Renaissance and Early Modern art of Western Europe. A graduate of Cornell University (B.Arch, 1974) and of the Massachusetts Institute of Technology (PhD, 1985), she is a Fellow of the American Council of Learned Societies, the Mellon Foundation, the Center for Advanced Study in the Visual Arts at the National Gallery in Washington, the Kress Foundation, and the American Academy in Rome. She has also taught at the Courtauld Institute of Art of the University of London (London, UK), and at the Technion (Israel Institute of Technology in Haifa). Author and editor of several books, her most recent monograph is Cities at War in Early Modern Europe (Cambridge, 2010). A former book review editor for the Journal of the Society of Architectural Historians, she is also contributes critical reviews about contemporary buildings, museum exhibitions, and urban design projects to the Giornale dell'architettura (Turin, Italy).

PhD, Massachusetts Institute of Technology, Theory and Criticism of Architecture