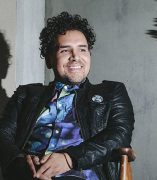 Marilynn Thoma Scholar in Art of the Spanish Americas

Emmanuel Ortega (PhD, Art History, University of New Mexico) is the Marilynn Thoma Scholar in Art of the Spanish Americas at the University of Illinois at Chicago. Ortega has lectured nationally and internationally on the topics of images of autos-de-fe, nineteenth-century Mexican landscape painting, and visual representations of the New Mexico Pueblo peoples in Novohispanic Franciscans martyr paintings. Springing from his research interests, Ortega has curated in Mexico and the United States. In 2015, Ortega partnered with the Museo de Arte Religioso Ex-Convento de Santa Mónica in Puebla Méxicoto curate two art exhibitions based on recently restored paintings from their collection, one of which is now part of their permanent galleries. An essay titled "Hagiographical Misery and the Liminal Witness: Novohispanic Franciscan Martyr Portraits and the Politics of Imperial Expansion," was published by Brill in the Spring of 2018. He is a recurrent lecturer for Arquetopia Foundation for Development, the largest artist residency in México.