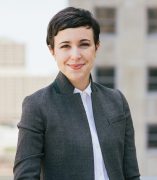 Sarah Rogers Morris is a doctoral candidate in the Department of Art History at the University of Illinois at Chicago. She studies photography and architectural modernism within an international frame. She is particularly interested in the ways in which visual and physical traces of the past have been deployed and theorized as primary sources that support, expand, complicate, or elude historical analysis. Her research on photographic surveys of infrastructure produced for circulation in primary and secondary school classrooms revises the history of American architectural photography by revealing its transnational formation and imperial origins between 1890 and 1940.

Sarah holds an MA in the history of design, decorative arts, and material culture from the Bard Graduate Center and a BA in art history from New York University. Her writing has been featured in a variety of scholarly and popular web and print publications, including Future Anterior, Architect's Newspaper, and Pin-Up. Sarah has worked in the non-profit sector for over a decade, including at the Graham Foundation for Advanced Studies in the Fine Arts, Mies van der Rohe Society, and most recently, as Executive Director of the Chicago Women in Architecture Foundation. She serves on the board of the Society of Architectural Historians and volunteers as a room parent at her kids’ public school.