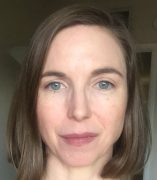 Associate Professor of Art Since 1945

Elise Archias’s research and classes center around art since 1945 including performance art and dance, asking questions about the relationship between abstract ideals, physical materials, and human needs in 20th- and 21st-century life and aesthetics. Her book, The Concrete Body – Yvonne Rainer, Carolee Schneemann, Vito Acconci (Yale University Press, 2016) was the winner of the Frank Jewett Mather Award for art criticism in 2018 and the Miess/Mellon Author's Book Award in 2015. The book explores the ways the use of the body as a material in the work of three prominent performance artists revised and maintained modernist aesthetics for the 1960s as part of a broader critique of everyday life within spectacle culture. Her next project considers a painter (Joan Mitchell) and sculptor (Melvin Edwards) in the late 1950s and 1960s who held on to modern ideas and forms, in spite of the fact that these individuals belonged to identity categories formerly excluded from the modern categories of “citizen” and “human.” She has presented her work on performance, sculpture, and painting in various venues nationally and internationally, including the Getty Research Institute, the Henry Art Gallery, University of British Columbia, the Archives of American Art, and the Slought Foundation. She worked as an assistant professor at California State University, Chico, before coming to UIC in 2012. She was a scholar in residence at the Georgia O’Keeffe Museum Research Center in 2011. As a fellow at the Smithsonian American Art Museum in spring 2016, she pursued her research on Joan Mitchell and abstraction in the long ‘Sixties. In winter 2017, she curated Embodiment Abstracted: The Influence of Yvonne Rainer at UIC’s Gallery 400, an exhibition featuring seven artists’ performance and video work from the early 2000s. In 2021 and 2022 she edited a special double issue of nonsite called "Contemporary Art and the PMC." She advises dissertations on contemporary art in the context of global capitalism, and has advised master’s theses on modern and contemporary performance, sculpture, performance art, and public art.

Artistic and Professional Performances and Exhibits