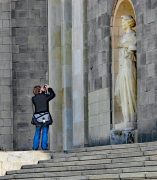 Mikolaj, or Mik, Czerwinski is completing a dissertation titled, “ 'An Intelligent, Complex, and Human Design Project’: Design as Social and Political Practice in Poland 1956-1976.” This project examines the establishment of industrial design in Poland during the long sixties in relation to connections between designers working in the country and a larger European design culture. As a result of these connections, modernist designers from the two national academies of fine art adopted “design methodologies,” an approach meant to turn design into an objective operation concerned with the entire production process. Such a methodology offered them a way to create on a multitude of scales in order to bring objects of everyday life to their fellow citizens. By looking closely at connections between design produced in Poland, a country in the Eastern Bloc, and Western Europe the dissertation challenges the notion of Eastern Europe as separate from its Western counterpart following the Second World War. In addition to questioning this dichotomy, Mik scrutinizes the perception of Easter Europe as homogeneous. Rather, he considers the differences in design practice and its relationship to a specific place or political system such as one-party rule in real-existing socialism.

The research for this dissertation project was made possible by a Fulbright Research Award (2015-2017). While stationed in Cracow, Poland, Mik presented lectures at the Academy of Fine Arts in an attempt to share both his knowledge and perspective as a US scholar studying design practice in a Central and Eastern European country. He shared this perspective with the broader community by publishing an article titled “How to Write a History of Central-Eastern European Design Using Global Art History Methodology” in the design journal, 2+3D. The essay argued that research exploring the connections between the Western Europe and the US, on the one hand, and regions historically underrepresented in design history, on the other, offers ways to bring the latter into the fold of the disciple as well as better understand the work created in those regions.