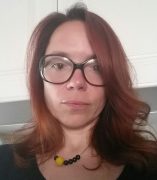 A writer and educator, Terranova researches complex biological systems from a cultural purview, focusing on the history of evolutionary theory, biology, and biocentrism in art, architecture, and design. Terranova is coeditor with Meredith Tromble of Biotechne: Interthinking Art, Science, and Design, a book series on Bloomsbury Press. She is author of Art as Organism: Biology and the Evolution of the Digital Image (2016) and Automotive Prosthetic: Technological Mediation and the Car in Conceptual Art (2014), and coeditor with Meredith Tromble of The Routledge Companion to Biology in Art and Architecture (2016). She also edited a two-volume issue of the journal Technoetic Arts on “complexism” (2016).

Terranova is currently coediting with Ellen K. Levy D'Arcy Wentworth Thompson's Generative Influences in Art, Design, and Architecture: From Forces to Forms (Bloomsbury, 2019) and writing a monograph titled Biology in the British Bauhaus: Morphogenic Modernism in Art, Science, and Design (Bloomsbury, 2019). Professor of Visual and Performing Arts, she lectures and teaches seminars at the University of Texas at Dallas on modern and contemporary art and architectural history and theory, the history of biology in art and architecture, and media and new media art and theory.

Inaugural director and curator of Centraltrak: The UT Dallas Artists Residency, Terranova regularly curates and writes art criticism. From September 2015 to February 2016, Terranova collaborated with Davidson College Professor of Biology David Wessner in the SciArt Center NYC's virtual residency program. As part of the residency, Terranova and Wessner co-curated in February 2016 Gut Instinct: Art, Design, and the Microbiome, an on-line exhibition about art, the gut-brain axis, and gastrointestinal microbiome. In the fall of 2015 at Gray Matters Gallery in Dallas, Texas she curated Chirality: Defiant Mirror Images, an exhibition about art and the scientific concept of "chirality," or non-superimposable mirror images.