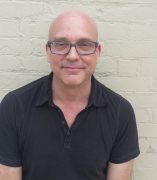 Chair and Professor of Contemporary Art, Critical Theory, and the History of Photography

Blake Stimson is a specialist in contemporary art, critical theory, and the history of photography. He joined the Department of Art History in 2012. Before coming to UIC he was Professor of Art History and then Cinema and Technocultural Studies at University of California, Davis, where he also served as an active member of the graduate programs in Critical Theory, Cultural Studies and Performance Studies and worked as a dissertation adviser for students from several additional programs.

He has written for Art Journal, Art Bulletin, Artforum, October, Texte zur Kunst, Oxford Art Journal, Third Text, New Left Review, Tate Papers, Etudes photographiques, Philosophy and Photography, The Brooklyn Rail and Nka: Journal of Contemporary African Art, among many other publications. He is the author The Pivot of the World: Photography and Its Nation (MIT, 2006) and Citizen Warhol (Reaktion, 2013) and co-editor of five volumes: Conceptual Art: A Critical Anthology (with Alexander Alberro, MIT, 1999), Visual Worlds (with John R. Hall and Lisa Tamaris Becker, Routledge, 2006), Collectivism after Modernism: The Art of Social Imagination after 1945 (with Gregory Sholette, Minnesota, 2007), The Meaning of Photography (with Robin Kelsey, Clark Art Institute and Yale, 2008), and Institutional Critique: An Anthology of Artists’ Writings (with Alexander Alberro, MIT, 2009). His work has been translated into French, German, Spanish, Portuguese, Swedish, Chinese, Japanese, Korean, Polish and Serbian.

He is currently working on three book projects: "Vito Acconci and You," co-authored with Elise Archias, centers on Acconci's 1972 work Seedbed; "Guilt as Form," traces a counter-genealogy of contemporary art arising from the turmoil of 1960s; and "Seeing Like a State" focuses on the mature political aesthetics of Paul Strand.

Professor Stimson currently advises PhD candidates working in several areas: emotion in American art criticism; art and political accountability in Eastern Europe; art and the lost promise of socialism in Chile and Spain; modernist antimodernism in Iranian art and criticism; chaos in twentieth-century aesthetic theory and information theory; and photography and political subjectivity at the time of Iran's Constitutional Revolution.

Culture in the Moment of Its Obsolescence, Medium (April 2020)